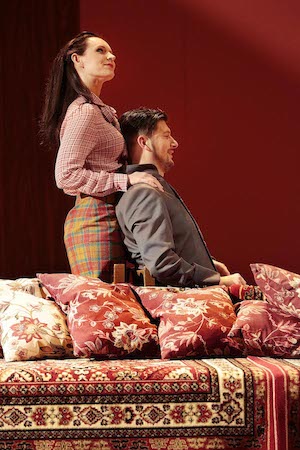 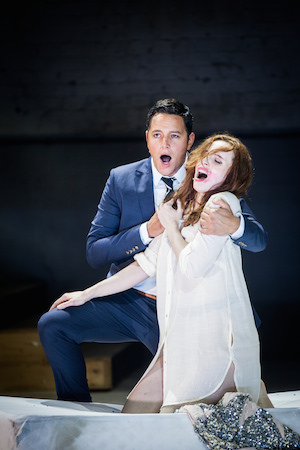 Alexandra Flood will begin her season at the Opéra National de Paris, performing ‘Female Chorus’ – one of the leading roles – in the Académie’s new production of Benjamin Britten’s devastating 1946 opera, The Rape of Lucretia. She will be part of the opening of the Festival d'Aix-en-Provence under the baton of Thomas Hengelbrock and the Balthasar Neumann Orchestra singing Mendelssohn's concert aria "Infelice". In December 2020, the Australian Soprano made her role and house debuts as Nanetta in a production of Falstaff at the Malmö Opera with stage direction by Steven Sloane and Lotte de Beer.

The 2019/20 kept the young artist busy, with performances including a recital in the Salon of Teatro La Fenice as part of the Australian Exhibition at the Venice Biennale 2019, the soprano solo in Beethoven's Ninth Symphony at the opening gala of the Port Fairy Spring Music Festival in Australia, recitals of French and German song with the pianist Alex Raineri at the Port Fairy Spring Music Festival and Opera Queensland, one of the soprano solos in Mendelssohn's Lobgesang at the Styriarte Festival in Graz, a New Year Gala Concert at the Konzertsaal Bern, and one of the soprano solos in Mozart's C Minor Mass with the Bochum Symphony Orchestra under Steven Sloane. In summer 2019 she was seen at Amsterdam's Grachtenfestival, where she performed a principal role in Vrouwenstemmen, a new opera composed by Meriç Artaç to mark a century of women's suffrage.

The young artist began 2019 by recording the world premiere of a series of Franco Alfano songs with Deutschlandfunk Kultur and Bastille Music Label before performing a recital of German and Swedish Lieder at the Northern Lights Festival in Tromsø, Norway and completing a summer residency at SongFest Los Angeles as the first Australian recipient of the Eva and Marc Stern Fellowship. In the 2018/19 season, she also made her role debut as Gretel in a Lotte de Beer production of Hänsel und Gretel with the Bochum Symphony Orchestra, and sang in opera galas at the Bolshoi Theater of Belarus, KKL Lucerne, and the Berlin Philharmonie.

In 2017/18, she returned to Bregenz to reprise the role of Norina (Don Pasquale) at Vorarlberger Landestheater before featuring as a guest soloist in the Bernstein Jubilee Concert with the North Netherlands Orchestra in a live national broadcast. She appeared as a soloist with the St. Petersburg Philharmonic in Russia and the Orchestra Sinfonica G. Rossini at the Teatro Pergolesi, as well as singing the soprano solo in Honegger's Le Roi David with the Bochum Symphony Orchestra. In July 2018 she made her debut as Jemmy in Rossini's William Tell at the Victorian Opera in Melbourne and returned to the Bangalow Music Festival as a guest artist with Teddy Tahu Rhodes and the Southern Cross Soloists.

Alexandra began the 2016/17 season with Serpetta (La finta giardiniera) at the Niedersächsische Musiktagen and Norina together with Mariusz Kwiecień as Malatesta (Don Pasquale) at Opera Krakowska. She performed Maria from West Side Story in Bolzano and originated the role of Miranda/Trincolo in the world premiere of Moritz Eggert's opera Caliban, which was staged by Lotte de Beer for the Dutch National Opera's Opera Forward Festival in Amsterdam. She appeared as Valencienne (Die lustige Witwe) at the Schlossfestspiele Langenlois in Austria and as Echo in a partial concert performance of Ariadne auf Naxos at the Richard Strauss Festival opera gala concert, where she also performed in the prizewinners' concert and accepted the first runner-up place at the Richard Strauss Competition in Munich.

The Australian soprano made her professional European debut in 2014 as a member of the prestigious Young Singers Project at the Salzburg Festival, where she appeared as the Modistin (Der Rosenkavalier) in the new festival production by Harry Kupfer. In Salzburg she also appeared as Blonde in Die Entführung aus dem Serail for children and Clorinda in La Cenerentola for children. Other roles in previous seasons have included Marguerite (Le Petit Faust) at Gärtnerplatztheater in Munich, Bystrouška (Cunning Little Vixen) with Pacific Opera in Sydney, and Violetta (La traviata) at Operafront & Grachtenfestival with stage director Lotte de Beer.

Alexandra Flood makes her house debut at the Volksoper Wien

Australian soprano Alexandra Flood made her successful house debut as Musetta in Harry Kupfer’s production of La Bohème at the Volksoper Wien under the baton of Omer Meir Wellber.

Furthermore, she also jumped in as Brigitte in Jolanthe und der Nussknacker.

Soprano Alexandra Flood returns to the stage with the Bochumer Symphoniker singing the soprano solo in Mozart’s Great Mass in c minor KV427 under the baton of conductor Steven Sloane. The first concert in the series of three begins Febrauary 20th at 20:00!