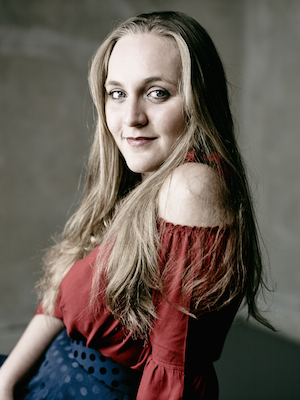 From 2018-2020, she was a member of the opera studio at Staatsoper Stuttgart, where the soprano was seen on the house's main stage in several roles: Frasquita (Carmen), Frau Herz (Der Schauspieldirektor), Xenia/Die Geflüchtete (Boris Godunow), Diane (Iphigénie en Tauride), Countess Ceprano (Rigoletto)and Masha/Prilepa (The Queen of Spades). She also appeared as a soloist in Bruckner's Te Deum in Konstanz.

In summer 2018, the young artist won a coveted place in the Salzburg Festival's prestigious Young Singers Project, where she sang Papagena in the production of The Magic Flute for Children and also appeared in the Young Singers Project closing concert. In 2017, she performed the role of the Fairy in Massenet's Cendrillon at the Theater Freiburg.

In 2016, Carina was a member of the opera studio at the Badisches Staatstheater Karlsruhe, where she appeared on stage as one of the Greeks in Iphigénie en Tauride, one of the Apparitions in Macbeth and Frasquita in Carmen. Other highlights of her performing experience include the role of Drusilla in L'incoronazione di Poppea at the Hochschule in Karlsruhe, as well as Johanna Barker in Sweeney Todd and Amor in Gluck’s Orfeo ed Euridice at Theater Freiburg.

Carina has won many competition prizes, she was a finalist at the 10th Hilde Zadek International Singing Competition in Vienna in 2017, where she received several special prizes including the prize of the Arnold Schönberg Center and the International Opernwerkstatt in Switzerland.

The German lyric coloratura soprano was born in Freiburg im Breisgau, Germany and acquired substantial stage experience at a very young age as a member of the children’s choir of Theater Freiburg. In 2017, she graduated with a bachelor's degree in operatic performance from the Hochschule für Musik in Karlsruhe, where she studied with Maria Venuti.

Young soprano Carina Schmieger debuts as Xenia/The Refugee in the premiere of Modest Mussorgsky’s BORIS at Staatsoper Stuttgart. The show begins at 18:00 this Sunday February 2nd.

The premiere will be recorded by SWR2 and broadcasted the same evening at 8:03pm.

The young soprano will make her role debut as Diane in Gluck’s Iphigénie en Tauride at the Staatsoper Stuttgart this Sunday at 18:00. Toi toi toi Carina!

This past weekend, soprano Carina Schmieger made her debut singing the role of Antigone in Leo Dick’s Antigone-Tribunal at the Staatsoper Stuttgart!