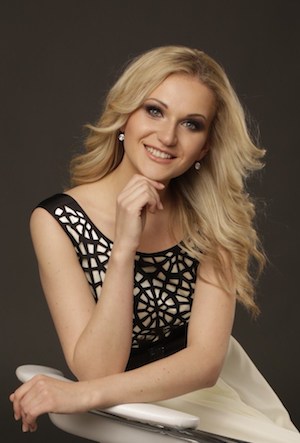 The young up-and-coming Estonian mezzo has started off 2019/20 with her debut at the Royal Swedish Opera as Angelina in La Cenerentola. Also planned for this season, Dara will sing Eudossa in concert performances of Hasse’s Irene for her return to Theater an der Wien and in Helsinki with the Helsinki Baroque Orchestra alongside Max Cencic and Vivica Genaux, and see her debut as Dorabella at Opera Ballet Vlaanderen in April 2020. In Spring 2019 she toured with the Ensemble Mattheus and JC Spinosi as Goffredo in Handel’s Rinaldo.

Savinova held a part-time ensemble contract with Theater Detmold where she appeared as Dorabella in Mozart's Cosi fan tutte, Nancy in Flotow's Martha, Hansel, and Siebel in Gounod's Faust in the 2018/19 season. In the summer of 2018 she returned to the Martina Franca Festival under the baton of Fabio Luisi in Handel's Rinaldo (Eustazio).  In spring 2019 the mezzo-soprano goes on tour as Goffredo in Handel's Rinaldo under the baton of JC Spinosi, and in fall 2019 she makes a role and house debut at the Royal Swedish Opera as Angelina in Rossini's La Cenerentola.

She debuted under the baton of JC Spinosi in the 2017-18 season in concerts of Carmen (title role) at the Opera Royal de Versailles and in Brittany and Spain.

During the 2016-17 Dara returned to the Zurich Opera in the 2016-17 season (May 17)  in the title role of Ravels's L'Enfant et les Sortileges in a new production directed by Sonja Füsti and conducted by Pavel Baleff. Earlier that season she debuted the role of Rosina in Rossini's il barbiere di Siviglia at the Bashmet Winter Festival in Sochi, Russia.

In summer 2017 the artist made an important debut at the Bregenz Festival in Rossini's Mose in Egitto (dir. Lotte de Beer, cond. Enriche Mazzola) as Amenofi, a co-production with Oper Köln.

Other recent notable debuts of the young artist include at Theater Basel as the 2nd Lady in Mozart's The Magic Flute in fall 2015, a return to the Festival della Valle d'Itria Martina Franca for a role debut as Dorabella in Mozart's cosi fan tutte at the under the baton of Fabio Luisi in summer 2015.  Dara Savinova was also a member of the prestigious Young Singers Project of the Salzburg Festival in summer 2015, made her Salzburg Festival debut as the 2. Weise in R. Strauss' Der Rosenkavalier and toured China with the Young Singers Project.    She made her debut in summer 2014 at the Festival della Valle d'Itria as Alcide in La Lotta D`Ercole con Acheloo by A.Steffani.

Dara Savinova obtained a her bachelors and  masters degrees at the Salzburg Mozarteum, completing her studies in 2013,  and then joined the International Opera Studio of the Zurich Opera.  As a young artist in Zurich Dara was heard on stage as Page in Rigoletto, Lehrbub in Der Meistersinger, Fisherwoman in Britten's Peter Grimes, Prinzessin in Gänsemagd (Iris Ter Shiphorst), Bess in Schwemmer's Robin Hood, Ungeborene Kinder in Strauss' Die Frau Ohne Schatten, 3.Herr in B.Martinu's Juliette, and Elisaweta Bam in O.Strastnoy's Fälle.  She also covered many roles including 2nd Lady, Mercedes, Paulina, and Tebaldo.

While a student at the Salzburg Mozarteum, Dara Savinova appeared on stage as Cherubino, Galatea in Handel's Aci, Galatea e Polifemo, and Olga in Eugene Onegin.

She has studied and participated in masterclasses with the following artists:

Mezzo soprano Dara Savinova debuts at Théâtre des Champs-Elysées singing Ozias in Vivalidi’s Juditha Triumphans under the baton of Jean-Christoph Spinosi. This oratorio, written for a cast of all female voices, is the only surviving oratorio of Vivladi. The show starts tomorrow evening, February 11th at 19:30.

Dara Savinova sings the role of Eudossa in a concert performance of J.A. Hasse’s opera Irene tomorrow evening at Theater an der Wien. The concert is part of a tour with the Helsinki Baroque Orchestra under the baton of Aapo Häkkinen.

Estonian mezzosoprano Dara Savinova competed this last week in the finals of the 5th Concorso Lirico Internazionale di Portofino and walked away with the Città di Crema Award! As a part of her prize, she will perform a recital sponsored by the Comune di Crema e Incab! Congratulations Dara!!!

Mezzo Soprano Dara Savinova will sing Goffredo in Händel’s Rinaldo in the Tchaikovsky Concert Hall on the 23rd of April. This is the fourth stop on the Rinaldo Tournee with the Matteus Ensemble under the baton of Jean Christophe Spinosi, having already sung in Brest, Versailles, and Lyon. The final performance can be seen on April 27th at Theater an der Wien- toi toi toi Dara!
Conducted by: Jean Christophe Spinosi
Additional performance in Vienna April 27th

Dara Savinova takes the stage again at the Martina Franca Festival in Italy under the baton of Fabio Luisi!

Mezzo-Soprano stars in the title role in Bizet’s Carmen at the Centro Cultural Miguel Delibes in Valladolid, under the baton of Maestro Jean-Christophe Spinosi on Friday, 15th December Saturday, 16th December 2017.

Mezzo-Soprano Dara Savinova makes a role debut and festival debut at the Bregenz Festival as Amenofi in their production of Rossini’s Mose in Egitto.
The production, which opens on July 20th 2017 will be conducted by Enrique Mazzola and directed by Lotte de Beer.
Further performances will be on the 23rd and 31st of July 2017.