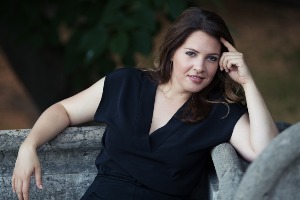 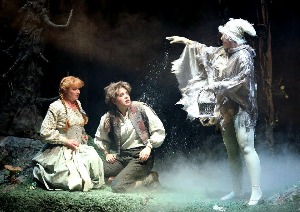 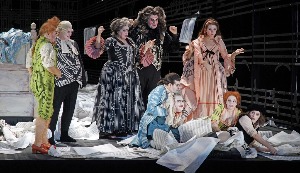 The “excellent” (Kurier) young Hungarian Mezzo-soprano Dorottya Láng has earned international acclaim for her “ravishing” (Musik Heute) and “impeccable” talent. John Allison writes in The Telegraph that “she quickly showed herself to be a singer of great musical poise. …with rich and even tone rising to a pure top.”

Born in Budapest in 1986, Ms Láng studied at the Universität für Musik und Darstellende Kunst Wien (Vienna’s University of Music and the Performing Arts) with Claudia Visca. Her awards and honours include Prize Winner of the 2012 Emmerich Smola Competition, Third Prize at the 2011 Wigmore Hall/Kohn Foundation Song Competition and Prize Winner at the 2013 Mozart Academie competition in Aix-en-Provence.

In the season of 2021/22 Ms Láng sang the role of Judit in the new production of Béla Bartóks and will sing the leading role of Rossini`s Cenerentola in the Riga Statopera. She will also sing the role of Hänsel in Hänsel und Gretel with the Netherland Reisopera and will be performing the role of Adriano from the early Wagner opera Rienzi in the Palace of Arts in Budapest under the baton of Marc Albrecht. In the upcoming seasons she will be heard in the roles of Octavian, the Komponist and Rosina at the Hungarian Stateopera.

After singing the role of Judit of Bartoks Bluebeard`s Castle under the baton of Adam Fischer in the Düsseldorf Tonhalle with great success, unfortunately, due to the pandemic, Dorottya Láng was unable to do her debut in the role of Meg Page in the new Falstaff production at the Munich Stateopera in the 2020/21 season.

The 2018/19 season saw Ms Láng returning to the Hamburgische Staatsoper for the roles of Minerva in Il Ritorno d’Ulisse in Patria and Hannah A. in Benjamin. She also performed Beethoven’s 9th Symphony with Wiener Symphoniker at the Wiener Konzerthaus under the baton of Andrés Orozco-Estrada, Szenen aus Goethes Faust at Stichting Omroep Muziek in Utrecht as well as her debut at the Hugo Wolf Academy in November 2018 with a Loewe song recital with Milan Siljanov. In addition, Ms Láng gave several recitals including at the Wiener Konzerthaus with Julius Drake and at the Oxford Lieder Festival with Julius Drake and Sholto Kynoch.

Operatic highlights of the 2017/18 season include the role of 3rd Flowermaiden in Parsifal, Lola in Cavalleria rusticana / I Pagliacci, Minerva in the Hamburg premiere of Willy Decker’s production of Il Ritorno d’Ulisse in Patria, Second Lady in Die Zauberflöte, Hänselin Hänsel und Gretel, Roßweiße in Die Walküre, Flora in La Traviata, Hannah A in the world premiere of Peter Ruzicka’s Benjamin at the Hamburgische Staatsoper, Fauré’s La Bonne Chanson in the Philharmonische Kammerkonzerte in June 2018 at the Elbphilharmonie.

In the 2017/18 season Dorottya Lang had several appearances at the Wiener Konzerthaus as part of their ‘Great Talent’ series. In January, she performed in a recital with the pianist Julius Drake and fellow recitalist Sophie Rennert, followed by a performance of Mozart’s Ch’io mi scordi di te in April. In June she also appeared at the Wiener Konzerthaus as a soloist in ‘The Bells’ by Fazil Sayand performed the second Mezzo-soprano part in Mahler’s Symphony No. 8 under Kent Nagano at the Elbphilharmonie in Hamburg.

Previous seasons have seen her perform the following roles at Hamburgische Staatsoper: Angelina in Renaud Doucet’s La Cenerentola, Hermia in Simon Phillips’ A Midsummer Night’s Dream, 2nd maid in Daphne, Vavara in Janáček’s Káťa Kabanová, Dorabella in Cosí fan tutte, Flora in La Traviata, and finally Cherubino in a Stefan Herheim production of Le nozze di Figaro conducted by Ottavio Dantone. Ms Láng has also appeared at the Mannheim Nationaltheater where she performed the following roles: Marguerite in La Damnation de Faust, Lola in Cavalleria Rusticana, Hänsel in Hänsel und Gretel, Flora in La Traviata, Smeraldine in The Love for Three Oranges and Mercédès in Carmen. At Malmö Opera House Ms Lang appeared as Octavian in Der Rosenkavalier, at Volksoper Vienna, Ms Lang appeared as Nancy in Britten’s Albert Herring, Nanette in Der Wildschütz, and the Page of Herodias in Salome At the Ruhrtriennale she performed Wellgunde from Rheingold under Theodor Currentzis.

A frequent performer on the recital and concert stage, Ms Láng has given recitals at the Wiener Konzerthaus with Matthias Lademann. She is a regular guest at the Oxford Lieder Festival with Julius Drake. In 2016 she made her Schubertiade debut with Helmut Deutsch and in 2015 she made her Wigmore Hall debut as part of the Rosenblatt Recital series again with Helmut Deutsch.Her concert appearances include Schumann’s Requiem für Mignon with Radio-Symphonieorchester Vienna at Wiener Konzerthaus under Cornelius Meister; and Romeo Castellucci’s staged performance of St Matthew’s Passion at Hamburgische Staatsoper conducted by Kent Nagano.

Dorottya Láng jumps in as Judith in Bluebeard’s Castle

The talented Hungarian mezzo soprano successfully jumped in as Judith in yesterday’s production of Bluebeard’s Castle at Luzerner Theater under the baton of Jonathan Bloxham and the direction of Anika Rutkofsky.

Dorottya Láng is singing her first leading Wagner role as Adriano in Rienzi.

The Hungarian mezzo-soprano Dorottya Láng is singing Adriano in the concert version of Richard Wagner’s opera Rienzi. Conducted by Marc Albrecht, tonight’s performance takes place in Béla Bartók National Concert Hall and is a part of the Budapest Wagner Days 2022.