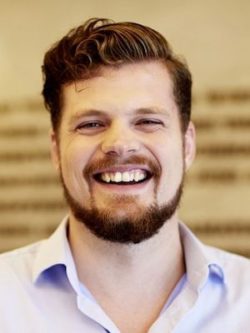 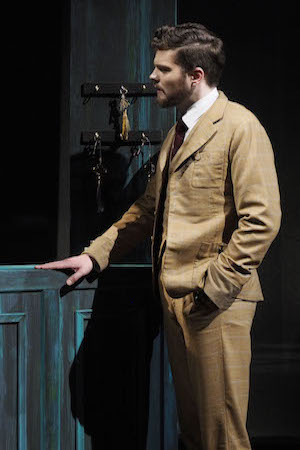 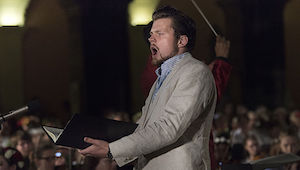 Baritone Kristján Jóhannesson returns to the mainstage of the Theater an der Wien in 2019/20 with the roles of Mathias/Faust in Prokofiev's The Fiery Angel and A Cappadocian/First Nazarene in Salome. His second season as a member of the Theater an der Wien's Young Ensemble also includes three roles at the Vienna Kammeroper: Valentin in Faust, Amanzio in Handel's Giustino and Beethoven in the world premiere of Tscho Theissing's Genia in March 2020.

The Icelandic baritone made his Vienna Kammeroper debut in September 2018, when he appeared as Prospero in Die Zauberinsel. For his performance in this original pasticcio based on Shakespeare's The Tempest, the Viennese press reported that 'Kristján Jóhannesson as Prospero received the most applause at the end ... his timbre is warm and full-bodied' (Wiener Zeitung) and 'Kristján Jóhannesson let his mighty bass boom with faultless diction' (Der neue Merker).

Other roles in new stagings at the Vienna Kammeroper last season included Posa in a reduced version of Verdi's Don Carlos and Dr Pangloss in Bernstein's Candide. The young artist was also heard on the mainstage of the Theater an der Wien as Lionel in a new Lotte de Beer production of Tchaikovsky's The Maid of Orleans.

Kristján previously enjoyed success at the Theater an der Wien with roles in no fewer than four productions in 2017/18. After making his house debut as the Second Apprentice in a new Robert Carsen production of Berg's Wozzeck, he went on to appear as Gunther in the Hagen and Brünnhilde parts of Tatjana Gürbaca's adaptation of Wagner's Ring, followed by the role of Starveling in a new Damiano Michieletto production of Britten's A Midsummer Night's Dream. In 2017/18 he also sang the role of the Count in Mozart’s Le Nozze di Figaro as part of the prestigious Angelika Prokopp Sommerakademie run by the Vienna Philharmonic, with appearances in various cities in Austria and at the Vienna Konzerthaus.

In Vienna, Kristján has also worked closely with the Neue Oper Wien, where he made his company debut with the roles of Nauarchos and Brasidas in Krenek’s Pallas Athene weint in October 2016. He returned to the Neue Oper Wien in February 2017 to sing the role of Jan in Panisello’s opera Le Malentendu, in a production that was seen at the Semperdepot in Vienna before touring to Madrid. In the same season, he sang Guglielmo in Così fan tutte for his debut with the Angelika Prokopp Sommerakademie and members of the Vienna Philharmonic at the Vienna Konzerthaus, and in Salzburg and Graz.

Past engagements include Escamillo in Bizet’s Carmen at the Icelandic Opera, and numerous concerts at prestigious locations such as the Vienna Musikverein and in various theaters in Italy, Iceland, and the United States. From 2008 until 2013 he was enrolled at the Sigurdur Demetz School of Vocal Arts in Reykjavik and began his career in Iceland with parts including Sir Richard Forth in Bellini’s I Puritani, Sylvan and He in Purcell’s King Arthur, the title role in Donizetti’s Don Pasquale, Bartolo in Mozart’s Le nozze di Figaro and the Speaker in Mozart’s Die Zauberflöte. He subsequently moved to mainland Europe and completed his studies at the Music and Arts University of the City of Vienna.

Tenor Johannes Bamberger and baritone Kristján Jóhannesson will make their respective debuts as Zweiter Jude and Kappadozier/Erster Nazarener this Saturday in a new production premiere of Strauss’s masterpiece Salome at Theater an der Wien. The show begins January 18th at 19:00.

Soprano Jenna Siladie and Baritone Kristján Jóhannesson will make their respective debuts as Marguerite and Valentin in Leonard Eröd’s Faust this evening at the Wiener Kammeroper. The premiere begins at 19:00. Both Siladie and Jóhannesson are members of the Junges Ensemble at Theater an der Wien.

Thursday May 16th, Baritone Kristján Jóhannesson will give his Portraitskonzert at the Wiener Kammeroper. He has been a member of the Young Ensemble at Theater an der Wien since the beginning of the 2018/19 season singing in many different productions. Toi toi toi Kristján!!!
Piano: Alevtina Sagitullina
Additional Performances: none- don’t miss out!

Johannes Bamberger and Kristján Jóhannesson debut in Candide at the Kammeroper tonight!

Tenor Johannes Bamberger and baritone Kristján Jóhannesson will be making their debuts this evening at 19:00 as Candide and Maximilan respectively in Leonard Bernstein’s Candide at the Kammeroper! Toi toi toi!!

Two of our fantastic artists, baritone Kristján Jóhannesson, and Bass-baritone Igor Bakan are making their role debuts respectively as Lionel and Bertrand in a new production of Tchaikovsky’s Die Jungfrau von Orleans at Theater an der Wien on March 16th!
Conducted by: Oksana Lyniv, Stage Direction by: Lotte de Beer