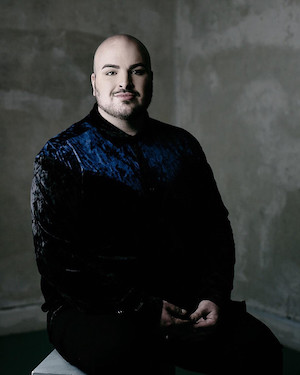 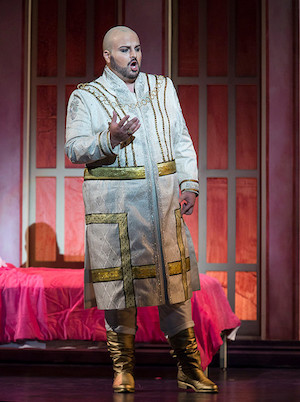 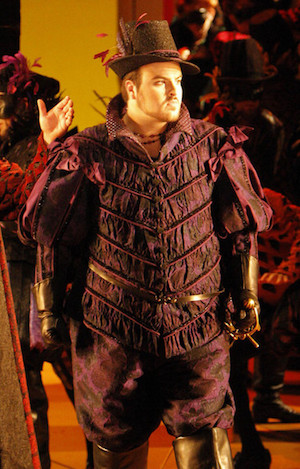 Matthew Anchel, called ‘a voice to watch’ by the Wall Street Journal,

returns to the stage post-corona in his debut as Banquo (Macbeth) at Staattheater Gießen. He will make his debut at the Tiroler Landestheater in the role of Sarastro.

Anchel returned for a second season as a full-time ensemble member at the Staatsoper Stuttgart, where he added the role of Antonio (Le nozze di Figaro) to his repertoire and reprised four roles that he also sang during his first season in 2018/19: Benoît (La bohème), Don Bartolo (Il Barbiere di Siviglia), The Cook/Farfarello (The Love for Three Oranges) and Luther/Crespel in Les Contes d’Hoffmann.

After appearing as a Grand Finalist in the 2013 Metropolitan Opera National Council Auditions, the American bass spent a number of seasons on the Metropolitan Opera roster. In 2017-18, his fourth season on the roster, he covered in new productions of The Exterminating Angel and Cendrillon. He also joined Santa Fe Opera to cover Tsar Dodon in their production of The Golden Cockerel, debuted with St. Petersburg Opera as Sarastro in The Magic Flute, returned to Spoleto Festival USA as Lamberto in Donizetti's Pia de' Tolomei, and sang the bass solo in Mahler's Symphony No. 8 at Carnegie Hall.

His engagements in 2016-17 included a debut with Anchorage Opera as Sparafucile (Rigoletto), a Carnegie Hall/Stern Auditorium debut in Haydn's Missa in tempore belli with the New England Symphonic Ensemble, Dvořák's Stabat Mater with the St. George's Choral Society, and a return to the Metropolitan Opera for Idomeneo, The Magic Flute, and Der Rosenkavalier.

During the 2015-16 season he appeared as #8 in Conrad Susa's Transformations with the Merola Opera Program, sang in Beethoven’s Mass in C with the Spoleto Festival USA, and performed with the Annapolis Chorale, Savannah Voice Festival, Canterbury Chorale and American Lyric Theater. 2014-15, his second season with the Metropolitan Opera, saw involvement in Met productions of Lady Macbeth of Mtsensk, The Magic Flute and Die Meistersinger von Nürnberg, and debuts with Opera San Antonio as the First Soldier in Salome, with LOFTOpera as Don Alfonso in Lucrezia Borgia, and with the Annapolis Chorale in Bach's St. John Passion.

The young artist first joined the roster of the Metropolitan Opera in the 2013-14 season with productions of The Nose and The Magic Flute. He also sang Ferrando in Il Trovatore with Opera in Williamsburg, the Bonze in Madama Butterfly in a return to Opera San Jose, the bass solo in the Mozart Requiem with Allentown Symphony, and returned to the Opera Theatre of Saint Louis for Sarastro in The Magic Flute, a production directed and designed by Isaac Mizrahi. Performances in the 2012-2013 season included Ferrando (Il Trovatore) with Opera San Jose, Alidoro (La Cenerentola) with Knoxville Opera, and Sarastro (The Magic Flute) with the Music Academy of the West.

For the 2011-12 season Matthew was an ensemble member of the Oper Leipzig, singing Zaretski (Eugene Onegin), Alaska Wolf Joe (The Rise and Fall of the City of Mahagonny), Marquis D'Obigny (La traviata), and The Police Inspector (Der Rosenkavalier), among other roles. From 2010-2011, he sang with the Los Angeles Opera as a member of the Domingo-Thornton Young Artist Program, performing the roles of Count Ceprano (Rigoletto) and the Fourth Noble (Lohengrin), both under the baton of James Conlon. He also joined the Los Angeles Philharmonic as Dr. Chasuble in the world premiere of Gerald Barry’s The Importance of Being Earnest.

Matthew’s other performance highlights have included Horaste (Troilus and Cressida) and First Soldier (Salome) with the Opera Theatre of Saint Louis; Familiare (Maria di Rohan) with the Caramoor Festival; and the title role in Le nozze di Figaro in his international debut with the Intermezzo Festival in Bruges, Belgium. He has also performed Sparafucile (Rigoletto), Enrico VIII (Anna Bolena), Oroveso (Norma), the Verdi Requiem, and Handel's Messiah.

In addition to his recognition from the Metropolitan Opera National Council Auditions, Matthew is a recipient of many awards. These include 3rd Place in the Palm Beach Opera Competition, the Judges Award from Opera Index, Encouragement Award from the George London Foundation, and Finalist and Encouragement Award in the Loren L. Zachary Competition. Born and raised in New York City, Matthew graduated from the famed LaGuardia Performing Arts High School, and later attended the Manhattan School of Music, where he began studying with his current teacher, Patricia McCaffrey.

From Mozart's The Magic Flute