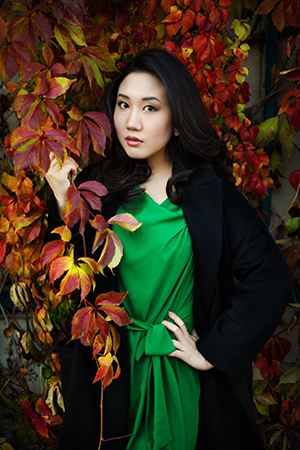 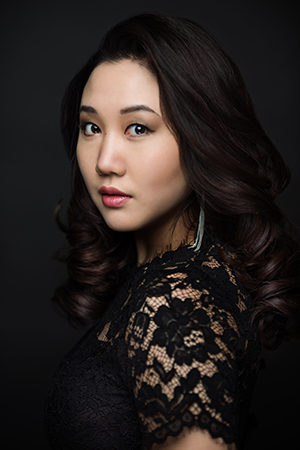 Coloratura soprano Sooyeon Lee begins the 2020/21 season as a member of the ensemble at the Theater Dortmund where she debuts the roles of Zerbinetta (Ariadne auf Naxos) and Blonde (Entführung aus dem Serail).

In June 2019, she represented her home country of South Korea in the finals of the Cardiff Singer of the World Competition, competing in the Song Prize category as well as the Main Prize. In the 2019/20 season she reprised her stand-out role of Lucia in Donizetti's Lucia di Lammermoor at the Oldenburg State Theater, as well as debuting the Controller in Jonathan Dove's opera Flight, Oscar (Un ballo in Maschera), and Amina in La sonnambula. Her busy season also saw her Musikverein debut in the Golden Hall in a series of New Years Concerts with the Tonkünstler Orchestra conducted by Alfred Eschwé.

Following her debut performances in the title part of Lucia di Lammermoor in December 2018, the Nordwest Zeitung wrote that 'a compelling magic comes with her voice'. Other roles in Oldenburg last season included Waldvogel in a new production of Siegfried, Konstanze (Die Entführung aus dem Serail), Gilda (Rigoletto), Sandmännchen/Taumännchen (Hänsel und Gretel), and Nérine in a new production of Rameau's Les Paladins.

In 2017/18, the South Korean artist gave critically acclaimed role debuts as Konstanze in a new production of Die Entführung aus dem Serail and Gilda in a new production of Rigoletto. She also appeared in a further two new stagings, as Ortlinde in Die Walküre and Laodice in Hasse's Siroe, Re di Persia. Towards the end of the season, she was awarded the Erna Schlüter Singing Prize, a special accolade presented in recognition of exceptional vocal achievements only once every two or three years by the Oldenburg State Theater. One month later, she was a finalist in the prestigious Queen Elizabeth Singing Competition in Brussels.

Sooyeon has been an ensemble member at the Oldenburg State Theater since 2016/17. During her first season, she was heard as the Sandmännchen/Taumännchen (Hänsel und Gretel), Marie (La fille du régiment), Woglinde (Das Rheingold), and Frasquita (Carmen).

The young soprano graduated with distinction from the University for Music and Performing Arts Vienna, where she earned a Master's degree in opera under Beverly Blankenship and Peter Marschik. Upon graduation, she continued her studies under Gabriele Fontana and Edith Lienbacher. In addition to her recent competition success and accolades, Sooyeon won the 2nd Prize and Audience Prize at the ARD Gesangwettbewerb in 2015, where she performed with the Bavarian Radio Symphony Orchestra. She has also won numerous other competitions, including the Berlin International Music Competition, the Gian Battista Viotti Competition, Pavarotti Giovani Awards, Beaumarchais International Music Competition in Vienna and the International Mozart Competition in Salzburg. She was also awarded the prestigious Culturarte Prize of Placido Domingo's Operalia in Kazakstan in 2017. Her earlier stage appearances included Gilda (Rigoletto) in Korea, and Adele (Die Fledermaus) at the Schlosstheater Schönbrunn. While at the University for Music and Performing Arts Vienna, she performed roles such as Olympia (Les contes d'Hoffmann), Queen of the Night (Die Zauberflöte), and Musetta (La bohème). At a lunch concert with the Berlin Philharmonic, she sang Brahms's 'Liebesliederwalzer'. In November 2014 she gave a solo concert as a Keumho Young Artist in South Korea.

Sooyeon Lee debuts with the Tonkünstler Orchestra in the Golden Hall of the Musikverein!

Sooyeon Lee kicks off 2020 with a series of New Years Concerts singing with the Tonkünstler Orchestra. She will make her debut this evening in the Golden Hall of the Vienna Musikverein singing selections from Donizetti, Kálmán, and Millöcker under the baton of Alfred Eschwé.

The concert tonight is one of a series of New Years Concerts by the Tonkünstler Orchestra. Below is a clip from ORF from the concert in the Festspielhaus in St. Pölten:

Sooyeon Lee to debut with Ensemble Pygmalion on their Libertà! tour this week

Coloratura Soprano Sooyeon Lee will sing with Ensemble Pygmalion under the baton of Raphaël Pichon on their Libertà! tour throughout France this week. She will be stepping in for Sabine Devieilhe in this concert series featuring an all-Mozart program. Performances are scheduled in Nancy, Evian, Toulouse’s Halle aux Grains, The Paris Philharmonie, Bordeaux, the Opera du Massy, and Caen.

Here is a trailer of the upcoming program:

Sooyeon Lee makes her debut as Oscar in Verdi’s Un ballo in maschera at the Oldenburgisches Staatstheater this Saturday!

Soprano Sooyeon Lee makes her debut singing Oscar in the classic Un ballo in maschera this Saturday December 7th at the Oldenburgisches Staatstheater. The premiere starts at 19:30.

Sooyeon Lee was recently a finalist representing her home country of South Korea in the BBC Cardiff Singer of the World in June 2019 and received glowing reviews for her performance as Lucia last season at the Oldenburgisches Staatstheater.

Soprano Sooyeon Lee passes to the Main Prize and Song Prize Finals at the 2019 BBC Cardiff Singer of the World!

Sooyeon Lee to compete in BBC Cardiff Singer of the World!

We are very excited to hear that soprano Sooyeon Lee will be representing South Korea in the BBC Cardiff Singer of the World competition this June! She will be singing in two categories, the Main Prize and the Song Prize. We are so happy to hear about this great news and will be looking forward to her performance! Toi toi toi Sooyeon!
Sooyeon Lee may be heard in the following performances:
BBC Cardiff Singer of the World, Song Prize Round 3  –  […]

Soprano Sooyeon Lee is set to debut the role of Nérine in a new production of Rameau’s Les Paladins at the Oldenburgisches Staatstheater this Tuesday, February 12th!

This past weekend, soprano Sooyeon Lee debuted as Lucia in Donizetti’s Lucia di Lammermoor with great success!
A review from Host Hollmann from the Nordwest Zeitung writes:
“The soprano soulfully plays with the notes. She holds the tension of the music in the less featured lower register, her captivating legato shines in her middle register, and her upper register is round and gentle. Her voice is compelling and enchanting.”
Orchestra conducted by Vito Cristofaro, Stage Direction by Stephen Lawless
Lee can be heard in additional performances […]

This coming weekend, South Korean Soprano Sooyeon Lee is set to make her debut as ‘Lucia’ the the production of Donizetti’s Lucia di Lammermoor at the Oldernburgisches Staatstheater. Opening night is December 8th, with additional performances on the 12, 14, 18, and 26th of December, February 6th, March 6th, April 6th, and 10th and 14th of June.

Soprano Sooyeon Lee passes to the Final of the Queen Elisabeth Competition for Voice 2018!

South Korean soprano Sooyeon Lee, a member of the ensemble of Staatstheater Oldenburg, will sing in the final of the Queen Elisabeth Competition on Thursday May 10 2018 at 21h25! Watch her live on the website of the Competition: Finalist of the competition