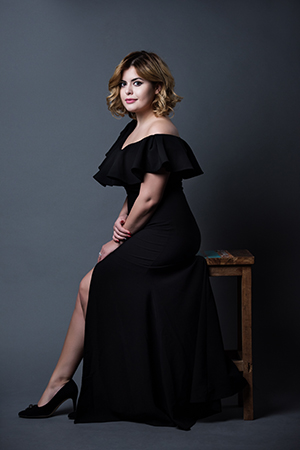 This fall, mezzo-soprano Aytaj Shikhalizada will return to Stadttheater Klagenfurt for her debut as Erda in Wagner’s Siegfried and Ulrica in Verdi's Un ballo in maschera.

In Summer 2022 she made her role and „lake“ stage debut as Suzuki in the new production of Puccini's Madama Butterfly at the Bregenz Festival. The mezzo-soprano won the 2nd prize of the Paris Opera Competition in January 2022. In fall 2021, she returned to Staatsoper Stuttgart to perform the role of Flosshilde in the new production of Das Rheingold, conducted by Cornelius Meister.

In 2020-21 Aytaj completed her second season as a member of the opera studio at the Staatsoper unter den Linden in Berlin, where she was heard in the role of Schäferin in Janáček’s Jenůfa under the baton of Sir Simon Rattle. In summer 2019 she sang the role of Olga in a new Jan Eßinger production of Eugene Onegin at the Bregenz Festival, and reprised the same role for her house debut at the Staatstheater Klagenfurt in December 2019. In 2020 a debut at the New National Theater Tokyo as the title role of Händel's Giulio Cesare was cancelled due to COVID.

The 29-year-old Azerbaijani made her professional European debut in June 2018, when she debuted the role of Isabella in Rossini's L'italiana in Algeri at the Opera Royal de Versailles in a concert performance conducted by Jean-Christophe Spinosi. She is also under contract with Azerbaijani TV and Radio, and regularly appears in her native country on TV and on the concert platform.

The young mezzo-soprano pursued Master's studies in singing with the renowned Professor Claudia Visca at the University of Music and Performing Arts Vienna. In Vienna, she performed the title role of Händel’s Oreste in January 2018, and previously appeared at the Schlosstheater Schönbrunn as Olga in Eugene Onegin, and at the Penzing Institute with scenes from Carmen as well as Charlotte in Massenet’s Werther. For her studies in Vienna, she was the recipient of a scholarship from the Dr. Robert and Lina Thyll-Dürr Foundation.

Aytaj studied voice and piano at the Baku Music Academy from 2010 to 2014 and Bülbil Music School, where she received a Young Performers Diploma with Honors. She is also the recipient of many prizes, including bronze medal for 3rd place at the 2014 Muslim Magomayev International Vocal Competition in Moscow, Grand Prix at the IX Azerbaijan Republic Contest ‘’Springs of the Soul’’ in 2013, and the 'Hope Prize' at the 2012 Bulbul International Vocalists Competition. In 2017, she also competed in the Bertelsmann Neue Stimmen Singing Competition in Gütersloh, Germany.

Aytaj Shikhalizada debuts as Ulrica in Un ballo in maschera

The talented mezzo-soprano made her role debut at Stadttheater Klagenfurt, conducted by Nicholas Milton. The production was directed by Bernd Mottl.

The talented Azerbaijani mezzo-soprano celebrated her successful role debut at Stadttheater Klagenfurt, where she will also be seen as Ulrica in Un ballo in maschera later this year.

Azerbaijani mezzo-soprano Aytaj Shikhalizada made her wonderful debut at this year’s Bregenzer Festspiele, conducted by Yi-Chen Lin. The large-scale production was directed by Andreas Homoki.

Mezzo-soprano Aytaj Shikhaliizada walks away with the 2nd Prize at the Paris Opera Competition, performing works by Rossini, Mozart and Rimsky-Korsikov! The competition will be available for viewing on Mezzo.tv shortly!

Aytaj Shikhalizada debuts in Jenufa at the Berlin State Opera

The young mezzo, a member of the Studio of the Berlin State Opera, appeared in the 3SAT Film of Janacek’s Jenufa alongside Camilla Nylund conducted by Simon Rattle on Feb 13, 2021. Watch the broadcast on 3 SAT: https://www.3sat.de/kultur/musik/jenufa-oper-in-drei-akten-102.html

Mezzo soprano Aytaj Shikhalizada will make her role debut as Nofretete at the Theater Dortmund in a new production of Philip Glass’s minimalistic masterpiece Echnaton. The premiere is tomorrow, May 24th! Toi toi toi Aytaj!

This past weekend the talented azerbaijani mezzosoprano Aytaj Shikhalizada made her dazzling debut as ‘Linetta’ in the new production of Sergei Prokofiev’s opera Die Liebe zu den drei Orangen!  Dir. Axel Ranisch, Conducted by Alejo Pérez, additional performances 14, 17, and 19 December,  4 and 11 January, and  9, 14, and 22 of April.

Azerbaijani mezzo-soprano Aytaj Shikhalizada, currently completing her masters at the University of Music and Performing Arts in Vienna, debuts on June 29th at the Opera Royal de Versailles as Isabella in G. Rossini’s Italiana in Algiers, conducted by J.C. Spinosi with the Ensemble Matheus. Aytaj also begins an ensemble contract at Theater Dortmund for the 18/19 season.

Top 4 Steroids For Sale That You Can Take Before Training – The Trent | Internet Newspaper Steroids-USA.net […]