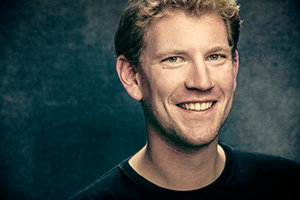 Opera director Jan Eßinger begins the 2019/20 season with a baroque rarity for his house debut at Theater Heidelberg: Georg Caspar Schürmann's Die getreue Alceste, in a production that will mark the 300th anniversary of the opera's premiere. This season he also returns to Theater Detmold for a new production of Der jüngste Tag by the 20th century German composer Giselher Klebe, as well as to Theater Bielefeld for a new staging of Prokofiev's The Love for Three Oranges.

The German director's busy schedule last season included new stagings of Faust at Theater Detmold (selected as the very first new production of the house's incoming artistic director), Hänsel und Gretel at Theater Bielefeld, and Albert Herring at Theater Koblenz. He made his Bregenz Festival debut in August 2019 with a new production of Eugene Onegin.

After turning freelance in the 2017/18 season, Jan oversaw the transfer of his production of L’Enfant et les sortilèges and L’heure espagnole to Opernhaus Zürich, where it premiered in January 2018. His staging of the Ravel double bill was previously shown at Theater Winterthur in May 2017.

After his successful directorial debut at Opernhaus Zürich with Martinů’s Alexander Twice in the 2013/14 season, he stepped in the following fall to direct Britten’s The Turn of the Screw, replacing the ill Willy Decker. Opera News wrote that the production was ‘so seamless and convincing … that one would never have guessed there had been any transfer of responsibility’. In May 2015 he directed the Swiss premiere of Oscar Strasnoy’s opera Slutchai/Fälle with the International Opera Studio in Zürich.

From 2010 to 2013, he worked as a revival director at the Komische Oper Berlin and was subsequently engaged in the same role at Opernhaus Zürich until the summer of 2017. In Berlin and Zürich he collaborated with major stage directors such as Barrie Kosky, Andreas Homoki, Sebastian Baumgarten, Calixto Bieito, Stefan Herheim, Herbert Fritsch, Dmitri Tcherniakov, Christof Loy and Willy Decker.

Born in 1983 in Darmstadt, Jan Eßinger studied music theater directing at the University of Music and Performing Arts in Hamburg. His student productions were shown at the Gaussstrasse annexe of the Thalia Theater and the Munich Biennale, before he completed his studies with a staging of Pfitzner’s Das Christ-Elflein. As an assistant director, he worked at opera houses in Vienna, Hamburg, Leipzig, Karlsruhe, Nice and Geneva, as well as the Bayreuth Festival, Wiener Festwochen and Bregenz Festival.

Stage director Jan Eßinger saw an important premiere this Friday at the Landestheater Detmold where he premiered his staging for Giselher Klebe’s Der jüngste Tag!

Jan Eßingers staging of Tchaikovsky’s classic opera based on Pushkin’s novel in verse, Eugene Onegin, will premiere tomorrow evening at the Bregenzer Festspiele! The show begins at 19:30 and we are thrilled to hear two more Sono Artists, Shira Patchornik and Aytaj Shikhalizada, as Tatjana and Olga in the production. Be sure not to miss it!