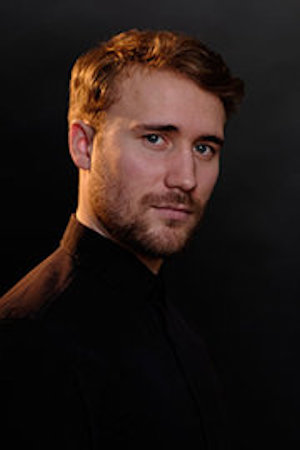 Johannes Bamberger begins a busy second year in the Theater an der Wien's Young Ensemble in 2019/20 as the Hunter in a new production of Rusalka, later appearing again on the house's mainstage as the Second Jew in Salome and the First Prisoner in a new Christoph Waltz production of Fidelio. Other roles at the Vienna Kammeroper include his debuts as Vitaliano in Handel's Giustino and Anton Schindler in the world premiere of Tscho Theissing's Genia in March.

The Austrian tenor made his Vienna Kammeroper debut together with his Young Ensemble colleagues in September 2018, when he appeared as Ferdinand in Der Zauberinsel. For his performance in this original pasticcio based on Shakespeare's The Tempest he was reviewed as having 'such a beautiful Mozart tenor – and an impressive technique to boot – that one wants to hear him in the great Mozart roles as soon as possible' (Der neue Merker).

Other roles in new productions at the Vienna Kammeroper in 2018/19 included the Teapot/Old Man/Tree Frog in Ravel's L'enfant et les sortilèges, Spalanzani in the Olympia act of Offenbach's Les contes d'Hoffmann and the title role in Bernstein's Candide. In January 2019, the young artist appeared twice on the mainstage of the Theater an der Wien: in a concert performance of Weber's Peter Schmoll he took on the role of Nicklas, and in a new production of Purcell's King Arthur he was cast as Tenor 1.

Johannes made his debut at the Theater an der Wien in 2017/18, when he appeared as Alfred Ill's Son in a new Keith Warner production of Gottfried von Einem's Der Besuch der alten Dame. The previous season he made his house debut at the Landestheater Linz with the role of Ecclitico in Haydn's Il mondo della luna. In 2017 he also made role debuts in two key works from the oratorio repertoire: as the tenor soloist in Bach's St John Passion, performed at the Festspielhaus St. Pölten under the baton of Otto Kargl, and as Uriel in a performance of Haydn's Creation conducted by Heinz Ferlesch at the historic Stift Melk.

Johannes began his artistic education at the music school in his hometown of St. Pölten under the tutelage of Jeannie Mayr, and later with Bernd Fröhlich in Vienna. In 2013 he enrolled at the University for Music and Performing Arts Vienna, where he pursued vocal studies with Professor Bernhard Adler and Professor Rainer Trost. While a student at the university, he made his first operatic appearances in the roles of Soldato pretoriano 1 / Liberto in Monteverdi’s L’incoronazione di Poppea (2015), and Mozart in Rimsky and Korsakov’s Mozart and Salieri (2016). In 2016 he was cast in two productions at the Schlosstheater Schönbrunn: as Bardolfo in Verdi's Falstaff with esteemed conductor Professor Christoph Ulrich Meier, and as Don Ottavio – a role debut – in Mozart's Don Giovanni under the baton of Guido Mancusi. Further role debuts at the University for Music and Performing Arts Vienna included the part of Cecco in Haydn's Il mondo della luna in Hainburg and Vienna, and Belmonte in Mozart's Die Entführung aus dem Serail. In 2015, he was also heard beyond Austria when he performed in a concert for the Fritz Wunderlich Society in the first Fritz Wunderlich Music Days (Musiktagen) in Kusel, Germany.

Johannes has gathered extensive experience as a soloist in many works of early music by composers such as Schütz, Scheidt, Schein and Monteverdi. In 2015 the young tenor made his role debuts as the Evangelist in Bach's Christmas Oratorio and the tenor soloist in Handel's Messiah. Under Otto Kargl, director of music at St. Pölten Cathedral, Johannes has also sung in sacred music and oratorios including Bach's St. Matthew's Passion, Mendelssohn's Elijah, as well as various masses and cantatas by composers such as Mozart, Schubert and Haydn.

Tenor Johannes Bamberger and baritone Kristján Jóhannesson will make their respective debuts as Zweiter Jude and Kappadozier/Erster Nazarener this Saturday in a new production premiere of Strauss’s masterpiece Salome at Theater an der Wien. The show begins January 18th at 19:00.

Johannes Bamberger gives his Portraitskonzert in the Wiener Kammeroper!

Tenor Johannes Bamberger will be performing Schubert’s Die Schöne Müllerin for his Portraitskonzert at the Wiener Kammeroper this evening! Toi toi toi Johannes!
Piano: Alevtina Sagitullina
Additional Perfromances: you get one chance guys!

Johannes Bamberger and Kristján Jóhannesson debut in Candide at the Kammeroper tonight!

Tenor Johannes Bamberger and baritone Kristján Jóhannesson will be making their debuts this evening at 19:00 as Candide and Maximilan respectively in Leonard Bernstein’s Candide at the Kammeroper! Toi toi toi!!

Tenor Johannes Bamberger will debut the roles of Kanne, Alter Mann, and Frosch in L’enfant et les sortilèges as well as the role of Spalanzani in Olympia at Theater an der Wien February 26th!
Conducted by Raphael Schluesselberg, Stage Direction by Barbora Horáková-Joly

Tenor Johannes Bamberger makes his house and role debut as Ecclicito in Haydn’s Die Welt auf dem Monde in a production of the Oberösterreichische Opernstudio at the Landestheater Linz on Saturday, 4th March 2017.
Further performances: 8/10/14/18/26/30 March 2017.
The production is directed by Gregor Horres and conducted by Martin Braun.