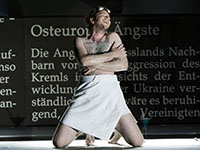 Tenor Lorin Wey continues as an ensemble member of the Theater Bielefeld in 2020/21, where he was performing Basilio in a new production of Le nozze di Figaro and Bajazet in Händels Tamerlano. Other roles in new productions will include Adam in Péter Eötvös's Paradise Reloaded (Lilith), the Funeral Director in Bernstein's A Quiet Place, and Truffaldino in a staging of The Love for Three Oranges directed by Jan Eßinger. In the house's revival of Orpheus in der Unterwelt, he will sing the role of Pluto/Aristeus.

The Swiss tenor joined the ensemble of the Theater Bielefeld at the beginning of the 2017/18 season. In his first season he sang Mime in a new production of Das Rheingold, Monostatos in Die Zauberflöte, and Roderigo in Verdi's Otello. He also performed the roles of Pasquale in Haydn's Orlando Palando and Funker in Emil Nikolaus Reznicek's Benzin, a Weimar-era Zeitoper which only received its first performances during the last decade. In March 2018, Lorin appeared with the Bielefeld Philharmonic as the tenor soloist in Mendelssohn's “Lobgesang” symphony.

In 2016/17, he sang Meletos in Ernst Krenek’s dodecaphonic opera Pallas Athene weint at the Neue Oper Wien, and appeared as the Prince in the European premiere of Cinderella at the Casino Baumgarten in Vienna. His performance in this opera by the British child prodigy Alma Deutscher subsequently featured in the TV documentary “Finding Cinderella”, which was broadcast on the BBC in summer 2017. In June 2017, he made his debut as the Tanzmeister in a David Hermann production of Richard Strauss's Ariadne auf Naxos at the Opéra National de Lorraine in Nancy, France.

In recent years, Lorin has appeared in several modern and contemporary operas. With the Neue Oper Wien, he performed the role of the Lawyer in a 2014 production of Sir Harrison Birtwistle’s Punch and Judy, and Kovalyov's valet Ivan in Shostakovich's The Nose in 2015. His debut at the Stadttheater Fürth took place with the role of Bruder in Israeli contemporary composer Ella Milch-Sheriff’s chamber opera Baruchs Schweigen. He has also performed three world premieres: as tenor soloist in Florian Reithner’s Critical Mass at the Jesuitenkirche in Vienna in 2013, as Second Announcer in Guido Mancusi's opera In Gottes Namen at the International Opernwerkstatt Schloss Laubach in 2014, and as the Evangelist in Guido Mancusi’s Saint John’s Passion at the Kalvarienbergkirche in Vienna in 2016.

Lorin is a regular guest soloist at the Bühne Baden near Vienna, having appeared as Mr. Erlanson in Stephen Sondheim’s A Little Night Music in 2015, as Detective Fox in Beppo Binder’s In 80 Tagen um die Welt in 2015, and as Sancho/Philippe in Lehár’s Frasquita in 2016.

In addition to opera, Lorin is an active concert performer in music of all eras and styles, and especially the works of J. S. Bach and the Viennese classical repertoire. He has regularly been a tenor soloist in Vienna's grandest churches, including the Augustinerkirche, Jesuitenkirche and Imperial Chapel.

The young tenor Lorin Wey was born into a Swiss-American family of musicians in Bern, Switzerland in 1990. After beginning his musical education with the Vienna Boys’ Choir and completing his Bachelor of Arts in Musicology with distinction, he studied solo singing as well as song and oratorio with Gabriele Sima and Elena Filipova at the Music and Arts University of the City of Vienna.

Charaktertenor Lorin Wey makes his debut as Adam in Peter Eötvös’s operatic take on the story of creation in Paradise Reloaded (Lilith). The opera is a recent work, premiering in 2013. The show in Bielefeld premieres at 19:30.

Conducted by Gregor Rot with Stage Direction by Nadja Loschky
Additional Performances 12. and 23. June
4. and 6. July

Soprano Beate Ritter and tenor Lorin Wey make their house and role debuts in Richard Strauss’ Ariadne auf Naxos at the Opéra National de Lorraine in Nancy singing the roles of Zerbinetta and Tanzmeister on June 6, 2017!
The production is conducted by Rani Calderon and directed by David Hermann.
Further performances: 8./11./13./15 June 2017.

Tenor Lorin Wey and Baritone Kristjan Johannesson appear in Ernst Krenek’s Pallas Athene weint with the Neue Oper Wien at the Museumsquartier, Vienna. The production, which is conducted by Walter Kobera and directed by Christoph Zauner, opens on Tuesday, 25th October 2016 and will run until Saturday, 29th October 2016.