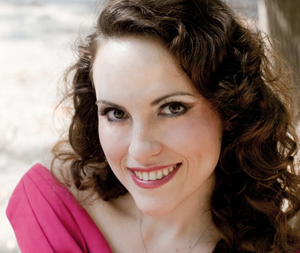 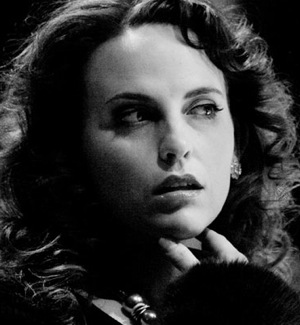 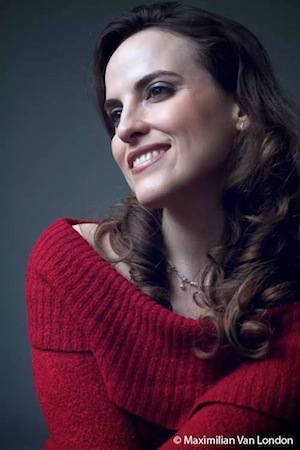 *not yet performed on stage

Rebecca Nelsen recently made her debut as Hanna Glawari in The Merry Widow at the Vienna Volksoper to great acclaim. Other roles for the 2020/21 season at the Vienna Volksoper, where she holds a contract as a member of the ensemble, will include: Pamina (Die Zauberflöte), Frauke Beeke Hansen (Das Gespenst von Canterville), Adele (Die Fledermaus), Violetta (La Traviata), and Gilda (Rigoletto). She will also debut the role of Alice Ford at the Malmö Opera this November and sing a series of concerts with the Bochum Symphony in early 2021.

Following her 'barnstorming' debut at the Leipzig Opera as Lulu in 2018, Rebecca Nelsen sang the soprano role in Berg's Lulu Suite on a European tour with the London Philharmonia and renowned Finnish conductor Esa-Pekka Salonen. Other plans for 2019/20 included her return to the Vienna Volksoper as Pamina (Die Zauberflöte), Eurydike (Orpheus in der Unterwelt), Fiona MacClaren (Brigadoon), and Frauke-Beeke Hansen in the Austrian premiere of Marius Felix Lange's Das Gespenst von Canterville. In early 2020, she made her debut at the Grand Théâtre de Genève singing Konstanze in Die Entführung aus dem Serail.

In 2018/19, the American soprano returned to the Malmö Opera as Violetta in a new Olivier Py production of La traviata, as well as making her house debut at the Opéra de Monte-Carlo with Konstanze in Mozart's Die Entführung aus dem Serail. The season began with three roles at the Vienna Volksoper: Pamina in Die Zauberflöte, Adele in Die Fledermaus, and Lauretta in Gianni Schicchi. In February 2019 she sang the role of Clara in a concert performance of Gershwin's Porgy and Bess and in June 2019 she appeared as Eurydice in the revival of Offenbach's Orpheus in the Underworld, both at the Vienna Volksoper.

For her June 2018 Leipzig Opera house debut in the title role of Alban Berg's Lulu, Rebecca's performance was described by the German press as 'perfectly cast', 'terrific' and 'a barnstorming role debut, both as a singer and actress'. In 2017/18, she also earned rave reviews for her transformation into the iconic Marilyn Monroe for the European premiere of Gavin Bryars' Marilyn Forever at the Vienna Volksoper. Other Volksoper appearances last season included Rosina in The Barber of Seville, Laura in Der Bettelstudent, Valencienne in Die lustige Witwe, Annina Giró in Vivaldi - Die fünfte Jahreszeit, as well as a return to the roles of Pamina, Adele, Violetta Valéry and Susanna.

After her June 2016 Perm Opera house debut as Violetta in a La traviata conducted by Teodor Currentzis and staged by Robert Wilson, Rebecca began the 2016/17 season with performances of the same role at the Vienna Volksoper. In November 2016 she debuted with Malmö Opera, where she starred as Susanna in a new production of Mozart's Le nozze di Figaro directed by Peter Stein. Appearances at the Vienna Volksoper during this season included her role debut as Rosina in The Barber of Seville, Annina Giró in a new production of Vivaldi - Die fünfte Jahreszeit, Pamina in Die Zauberflöte, Adele in Die Fledermaus, and Laura in Der Bettelstudent. She also appeared at the Vienna Musikverein as the soprano soloist in performances of Beethoven's 9th Symphony with the Tonkünstler Orchestra.

In 2015/16 Rebecca made her Glyndebourne Festival debut as Blondchen in the touring production of Mozart's Die Entführung aus dem Serail. During the holiday season, she appeared as the soprano soloist in New Year's Concerts at the Vienna Musikverein and other cities in Lower Austria with the Tonkünster Orchestra. Her appearances at the Vienna Volksoper included Pamina, Gretel, Adele, Violetta, Corilla (Viva la Mamma), Marzinah in a concert performance of Kismet, and Laura in a new production of Der Bettelstudent.

In summer 2013 the artist made her Salzburg Festival debut as Blonde in a new, live-TV production of Mozart’s Die Entführung aus dem Serail in cooperation with Servus TV, released on DVD (Arthaus). In November 2014 at the Maison de Radio France in Paris, she performed in a special carte blanche concert for Peter Eötvös in his 70th birthday year with the Orchestre Philharmonique de Radio France and the Ensemble Intercontemporain.

After studies at Vienna's University of Music and the Performing Arts on a Fulbright scholarship, Texan soprano Rebecca Nelsen launched her career with critically acclaimed performances at the Neue Oper Wien, where she most recently sang the role of Eva in the world premiere of Peter Eötvös' Lilith - Paradise Reloaded in Vienna and at the Palace of the Arts in Budapest with a CD recording.

Rebecca Nelsen is currently an ensemble member at the Vienna Volksoper, where she regularly sings Violetta,  Pamina,  Susanna, Grete, and Adele, among other roles. She regularly appears on the concert platform and has been heard with the Cleveland Orchestra, the Pittsburgh Symphony, and the Bochum Symphony, to name a few. She has an extensive discography and can be heard in Radek (ORF), Fedra (Oehms Classics), Momo Creation (iTunes) and The Brothers (CPO). She has also recorded the Songs of Walter Arlen with the Gramola label.

Send in the Clowns

American soprano Rebecca Nelsen made her much acclaimed role debut as Mimì in Harry Kupfer’s iconic La Bohème production at the Volksoper Wien. The production was conducted by Omer Meir Wellber.

On Saturday Jan 22 Rebecca sings Hanna Glawari in Léhar’s Die lustige Witwe under the baton of Sebastian Weigle in an acclaimed production by Claus Guth.

Soprano Rebecca Nelsen makes her debut as Fiona MacClaren in the Austrian premiere of Frederick Loewe’s Brigadoon at the Vienna Volksoper. The production will premiere Sunday December 1st at 19:00!

Rebecca Nelsen performs with the London Philharmonia under Esa-Pekka Salonen this Sunday!

Soprano Rebecca Nelsen will be singing Alban Berg’s Lulu Suite alongside the London Philharmonia Orchestra under the baton of renowned conductor Esa-Pekka Salonen this Sunday at 19:30! This is the first performance in a tour that Nelsen will sing with the Philharmonia around Europe this fall.

Be sure not to miss what will truly be a great concert!

The concert starts at 19:30 at the Royal Festival Hall in London

Rebecca Nelsen debuts as Eurydike in Orpheus in der Unterwelt!

Rebecca Nelsen debuts as Antonia alongside Beate Ritter as Olympia in Hoffmans Erzählungen at the Volksoper!

This Wednesday, April 17th, Rebecca Nelsen will make her role debut as Antonia in Offenbach’s Hoffmanns Erzählungen. Beate Ritter will return to the stage at the Volksoper as Olympia in the same show. Toi toi toi ladies!
Conducted by: Alexander Joel, Stage Direction by: Renaud Doucet
Additional performances for Nelsen: 26.04, 02.05, 07.05
Additional Performances for Ritter: 21.04, 02.05, 05.05

Rebecca Nelsen to debut as Konstanze at the Opera Monte Carlo