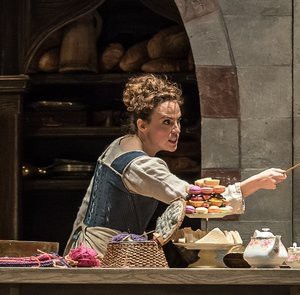 Soprano Rebecca Nelsen makes Glyndebourne debut as Blonde in Mozart’s DIE ENTFÜHRUNG AUS DEM SERIAL, under the direction of David McVicar with Christoph Altstaedt conducting. The performance is touring throughout Great Britain from October 25 to December 5, 2015.

”Rebecca Nelsen presents the English servant Blonde as a spitfire not to be messed with, even by Clive Bayley’s grand-scale comic-malignant Osmin, her top notes as fearless as his low notes are terrifying…” (George Hall, The Guardian)